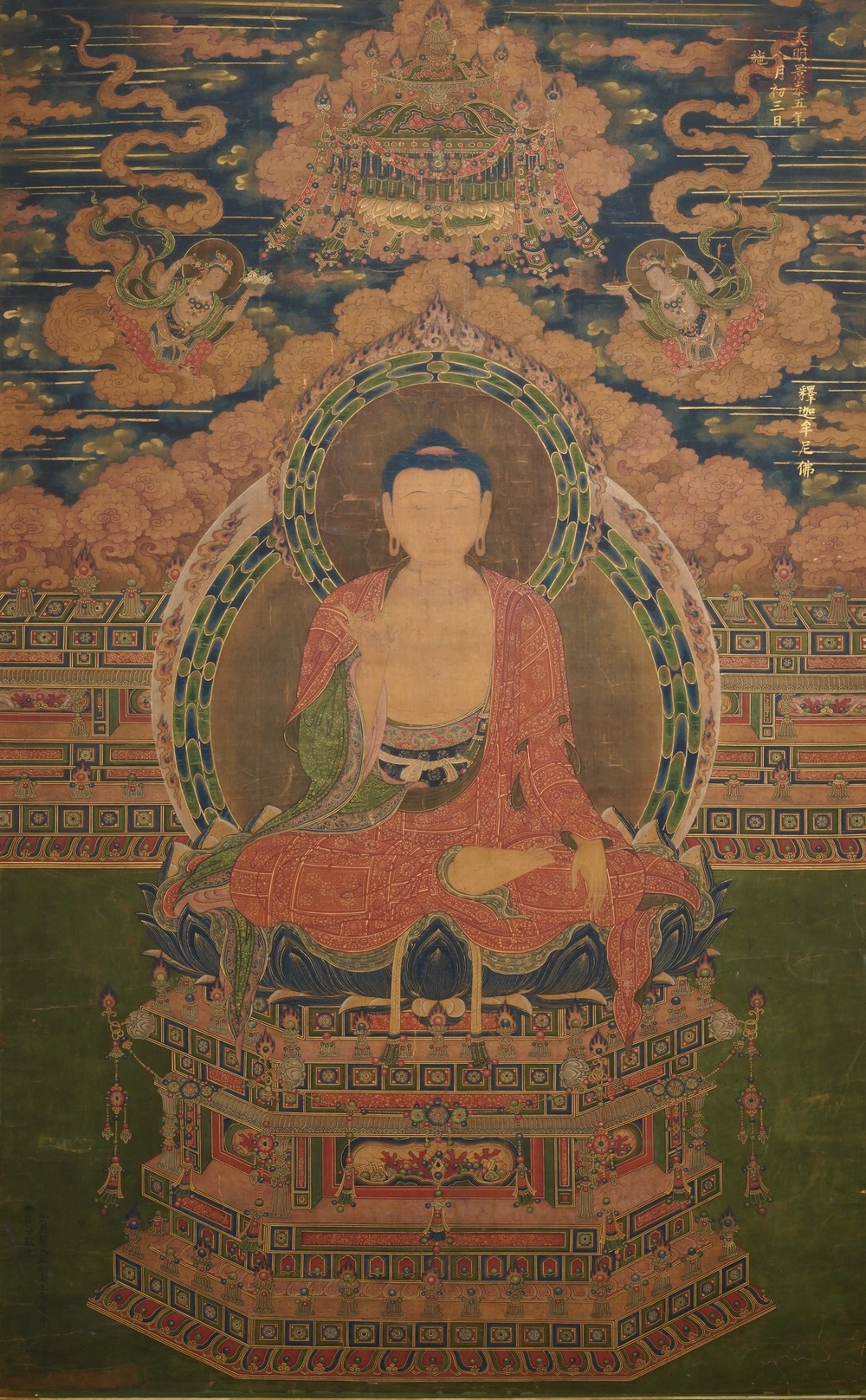 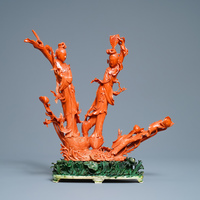 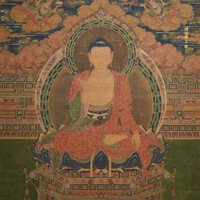 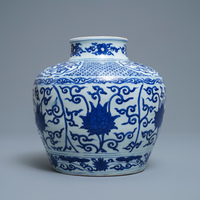 - To bid on this lot a pre-auction registration is required along with a deposit of 20.000 Euro.

Condition report: (UV-checked)
- Inspection under UV-light did not disclose any touch-ups other than those clearly visible.
- The silk is mounted on board or wood.
- Numerous small tears, small losses and superficial wear as visible, a limited number of visibly filled and retouched sections.

Note on the method of mounting:
- The painting is surrounded by its scroll mount, comparable to examples in the Cleveland Museum of Art and the Musée Guimet. On the sides, it is visible that the silk is mounted on the textile on the sides. The textile is clearly layered below the painted silk. Along the bottom edge, there is a horizontal loss visible along the entire width, except for the lower left corner where a small section of silk is still present, indicative for the exact length of the work. Along this loss, the board below the silk is colored green. It is clearly layered below the textile scroll mount. In our opinion, it is likely that there is a layer of paperboard between the silk and another backing, in all likelihood wood. The wood that is visible on the back of the frame, is not the wood that backs the work, there is too much space in between. We can not discern exactly how the silk is mounted onto the paperboard, but it is likely glued. The 1987 seller, Aalderink Gallery in Amsterdam, is likely to have employed a restorer of good standing, who would have applied reversible restoration methods. We are still trying to gather more information on the restorer and methods used.

Provenance:
- Acquired from Kunsthandel Aalderink, Amsterdam, in 1987, for 15.000 Dutch Guilders. (original invoice present)
- The identity of the buyer - a famous scientist - will be disclosed to the buyer. The last image shows the work in the house of the deceased owner.

Inscribed on the lower left: 'By imperial order, directed and supervised by the senior eunuchs of the Directorate of the Imperial Household Service, Shang Yi, Wang Qin, and others.' (御用監太監尚義王勤等奉命提督監造)
Inscribed on the upper right corner: Offered on the third day of the eighth month, the fifth year of Jingtai (1454) of the Great Ming Dynasty. The seal reads: Guang yun zhi bao (The Treasure of Grand Destiny). 大明景泰五年八月初三日施 [印] 廣運之寳
Inscribed middle right: Gautama Buddha.

The current painting was part of an imperial order by the Jingtai emperor, born Zhu Qiyu. He was the seventh Emperor of the Ming dynasty and reigned from 1449 to 1457.
The order pertained to the Water-Land (shuilu) ritual. It is the grandest of the Buddhist mortuary rites. This esoteric ceremony is conducted for the salvation of 'all souls of the dead on land and sea.' The ostentatious ritual was performed for imperial ancestors and high officials from the Song (960–1279) to the Ming dynasties and drew large crowds. On the second day of the weeklong ceremony, paintings are hung in the inner altar. It is said that the entire order consisted of 36 works. Given the subject, one can assume that this is one of the focal works of this series

Other works from this series in museum collections:
- The Cleveland Museum of Art (Cleveland, USA) has two works from the series, depicting 'The Bodhisattvas of the Ten Stages in Attaining the Most Perfect Knowledge' (link) and 'The Eight Hosts of Deva, Naga, and Yakshi' (link).
- The Metropolitan Museum (New York, USA) has one work from the series, depicting 'Star deities of the northern and central dippers' (link).
- The Musée Guimet (Paris, France) has eleven works from this series. (link)