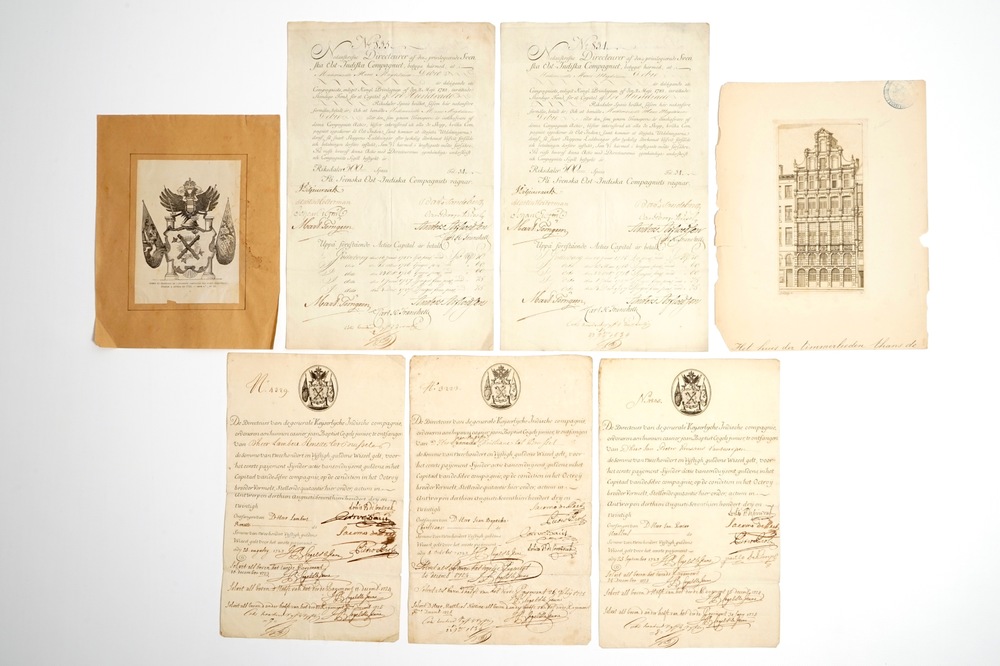 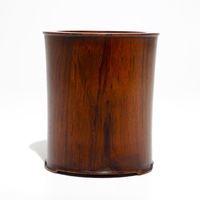 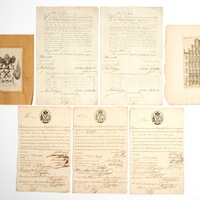 Condition: (UV-checked)
- Generally in good condition.
- The Ostend company shares with 3 folding lines each, the middle one somewhat more apparent on the share numbered 4329.
- N° 3223 with a ca. 9 mm tear in the middle on the right handside and of ca. 8 mm on the left. Minor superficial rust stains.
- N°4845 and 4329 with two small pinholes in the upper right section. Minor superficial rust stains. Minor wear along the edges.
- The Swedish company shares with 4 horizontal folding lines each, the upper one just below the upper edge.
- Each with a blindstamp.
- Each of double page format, the inside unwritten, with a watermark on the right page.

Added: An engraving of the coat of arms of the Ostend Company and one of the so called "Huis der Timmerlieden", where the company was partly founded.

The Ostend company:
The trade from Ostend in the Austrian Netherlands to Mocha, India, Bengal and China started in 1715. Some private merchants from Antwerp, Ghent and Ostend were granted charters for the East-India-trade by the Austrian govemment that had recently come to power in the Southern Netherlands. Between 1715 and 1723, 34 ships sailed from Ostend to China, the Malabar or Coromandel coast, Surat, Bengal or Mocha. Those expeditions were financed by different international syndicates composed of Flemish, English, Dutch and French merchants and bankers. The mutual rivalry between them however weighed heavily upon the profits and this resulted in the foundation of the Ostend East-India Company, chartered by the Austrian emperor in December 1722. The capital of the company was fixed at 6 million guilders, composed of 6,000 shares of 1,000 guilders each. It was mainly supplied by the moneyed inhabitants of Antwerp and Ghent. The directors were chosen out of the rich and skilled merchants or bankers who had been involved in the private expeditions. The company also possessed two factories: Cabelon on the Coromandel coast and Banquibazar in Bengal.

Between 1724 and 1732, 21 company vessels were sent out, mainly to Canton in China and to Bengal. Thanks to the rise in tea prices, high profits were made in the China-trade. This was a thorn in the side of the older rival companies, such as the Dutch VOC, the English EIC and the French CFT. They refused to acknowledge the Austrian emperor's right to found an East-India company in the Southern Netherlands and considered the Ostenders interlopers. International political pressure was put on the emperor and he finally capitulated. In May 1727 the charter of the company was suspended for seven years and in March 1731 the second treaty of Vienna ordered the definitive abolition. The flourishing Ostend Company had been sacrificed to the interests of the Austrian dynasty. Between 1728 and 1731 a small number of illegal expeditions was organized under borrowed flags, but the very last ships sailing for the company were the two "permission-vessels" that left in 1732 and were a concession made in the second treaty of Vienna.

Only a few documents are left because the municipal archives of Ostend were lost during the Second World War.

Not all the new companies were to be equally successful in their trading. The Swedish East India Company, established 1731 on the initiative of private merchants but with the caution of the central government, profited from the vain attempts of building new companies in some countries and from the short lived companies' existence in other as well. Both the Swedish and reformed Danish company were profiting from the vacuum created by the disappearance of the Austrian East India Company or commonly called Ostend Company because based in Ostend, itself dissolved under pressure from the great powers.

The companies ventured upon colonization, because for example, anyone who possessed settlements on the route to the Orient could revictual more easily during the passage, while those who did not, always had to go to their rivals or competitors to replenish their stocks of provisions or change their drinking water. If they intend to succeed, they had to work out schedules for quick and safe sailing routes and solve their own acute problems, especially when they were not always willing to depend upon their competitors. Even smaller companies tried to be represented both in India and in China in order to conduct trade there. It is plain that for smaller companies - and thus for smaller powers - the East was too far off and too vast in area for them to make an appearance everywhere on the trading scene.

The Swedes drew the lesson from their unfortunate Ostend colleagues, whose company's presence, both in India and China, had probably had accelerated its collapse. After several somewhat unsuccessful experiments in Surat and Bengal, the Swedes specialized in the China trade. The ultimate option of the Swedes for an East Indian trade that forsook, whether deliberately or otherwise, every form of colonization, was to bring nothing but profit to the enterprise and to sustain its prosperity for almost a century. This characteristic attitude would not be without historical significance for the Swedish policy of neutrality in later centuries.

Nevertheless the trade with China was a difficult one. The Chinese regarded all foreigners with suspicion and contact with the "Foreign Devils" was severely restricted. Trading was allowed only in Canton and only under the supervision of Chinese "Hong" merchants. Foreign traders were not even permitted to live in Canton and could only visit their warehouses during the trading season.
Once trading was finished, the cargo was loaded - porcelain in bundles, tubs and wooden boxes cushioned with rice paddy or marketable goods such as gallingall, pepper, rice, sago, or tea, at the bottom for ballast, followed by chests of tea and finally the precious silks and spices.
The China Trade was a risky venture. Taxes, tributes, bribes and deceptions were rife. Storms, pirates, disease and rival traders were constant threats during the two-year round trip voyage from Europe. Most went well but sometimes disaster struck - as with the Gotheborg. Despite the risks, traders made huge profits for their companies, themselves and their countries. (source: swaen.com)