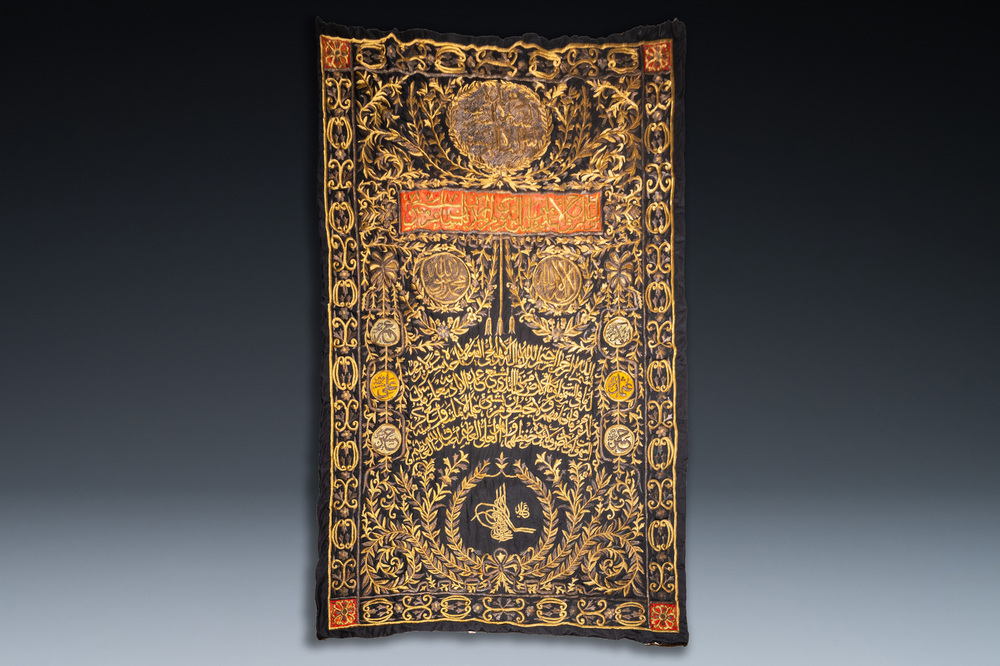 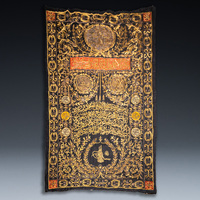 Ref.: The numbers between brackets refer to the last added reference image: Embroidered in silver and gilt threads over a black silk ground, the surface broken into cartouches of various shapes and sizes containing inscriptions in thuluth. The interstices filled with vegetal designs and floral scrolls, a large gilt inscription (5) halfway up on black silk ground enclosing Quran 2 verse 255 ayat Al-Kursi, ‘The Throne Verse’, one of the best-known verses of the Quran, widely memorized and displayed in the Islamic world. Flanked on both sides with six small roundels (4) enclosing the name of four Caliphs, Hassan and Hussein on a greenand yellow ground. Above the central panel two roundels (3) enclosing Al-Shahada surrounded by flower scrolls. The lower section (6) with the tughra of the Sultan in gilt and silver thread. The upper section with crimson band (1) enclosing ‘hadihi al-sitara al-sharifah li-bab minarah al-ra’isiya’. 'This panel was made for the door of the main minaret', and Quran 26 Al-Shu‘ara, the Poets vv.193-195 on a red ground. All surrounded with arabesques and vegetal motifs in silver and gilt thread.

- The cloth in very good condition, with some minor wear and traces of use, especially to the medallions and cartouches (the rectangular red one with small tears).

- In some places the wires a bit looser (esp. in the laurel wreath at the top), but certainly not disturbing.