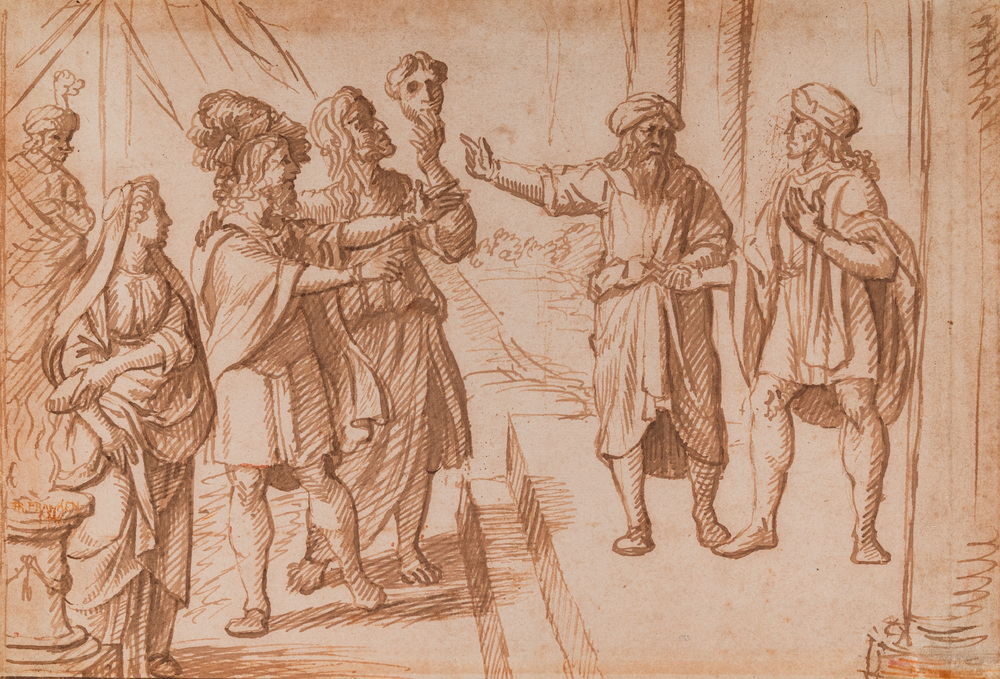 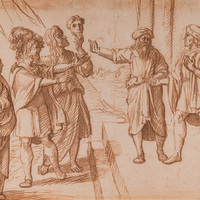 Executed in pen and brown ink, with touches of red and black chalk, within brown ink framing lines and with an inscription, possibly a later addition: FR. FRANKEN (recto); red chalk (verso).

Ref.:
- RKD, Netherlands Institute for Art History, ref. 235120, img.no. 1001482513, for this exact work (link).
- B. Schnackenburg, Jan Lievens. Friend and Rival of the Young Rembrandt, Petersberg 2016, pp. 30, 35-6, 52, 159-160, no. 2a (recto and verso reproduced): This drawing only came to light in 2015, when it was brought to the attention of Peter Schatborn, who confirmed the attribution to Jan Lievens. It clearly belongs to the fascinating, small group of early pen and ink figure drawings by Lievens. Although he demonstrates in these drawings his clear debt to the drawing style of his teacher, Pieter Lastman, with whom he seems to have studied in Amsterdam from 1618 until 1620, and to other so-called ‘pre-Rembrandtists’ such as Claes Cornelisz. Moeyaert, Lievens is here also beginning to find his own stylistic feet. The drawing must, though, predate the moment when the close artistic dialogue between the young Lievens and the young Rembrandt really began. It should therefore be dated around 1621-23 – when the prodigiously talented young artist was only in his mid teens – and it is very probably Lievens’s earliest known multi-figured drawing. The three key drawings with which this important new discovery can be compared are 'The Stoning of Saint Paul at Lystra' (London, British Museum, Museum no. SL,5236.124 link), 'Mercury and Argus' (Philadelphia Museum of Art, Accession no. 1985-52-29913, link), and the double-sided sheet with 'Sleeping Satyr' on the recto and 'Three Men and a Boy in a Wooded Landscape' on the verso (both sheets in Dresden, Kupferstichkabinett, link).

Short bio: Jan Lievens was sent to Pieter Lastman in Amsterdam at about the age of 10 for two full years. After that he began his career as an independent artist, at about the age of 12 in Leiden.
He became something of a celebrity because of his talent at such a young age. Specifically, his copy of Democriet & Herakliet by Cornelis van Haarlem, and a portrait of his mother Machtelt Jans van Noortzant, were admired. This attracted the attention of Maurice of Nassau, Prince of Orange, around 1620, who bought a life-size painting of a young man reading by the light of a turf-fire. He gave this painting in turn to the English Ambassador, who presented it to James I. This was the reason why in 1631, aged 24, he was invited to the British court. When he returned from England via Calais, he settled in Antwerp, where he married Suzanna Colyn de Nole, the daughter of the sculptor Michiel Colyns, on 23 December 1638. In this period he won many commissions from royalty, mayors, and city halls.
Lievens collaborated and shared a studio with Rembrandt van Rijn from about 1626 to 1631. Their competitive collaboration, represented in some two dozen paintings, drawings and etchings, was intimate enough to cause difficulties in the attribution of works from this period. Lievens showed talent for painting in a life-size scale, and his dramatic compositions suggest the influence of the Caravaggisti. In Constantijn Huygens' assessment, Lievens was more inventive, yet less expressive than Rembrandt. The two men split in 1631, when Rembrandt moved to Amsterdam and Lievens to England. In 1656 Rembrandt still owned paintings by his former friend. (source: Wikipedia)