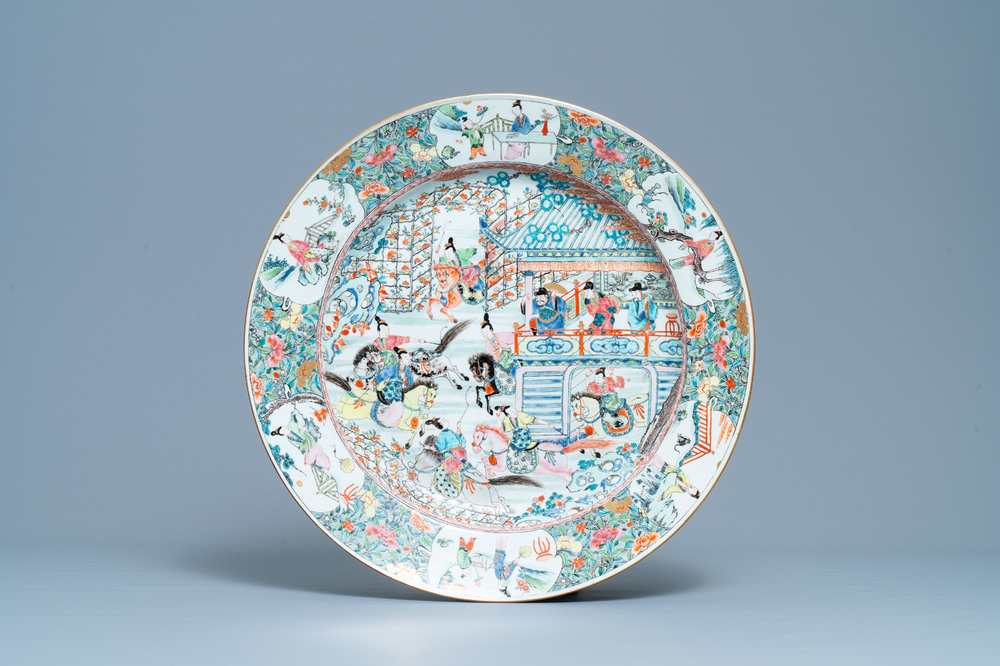 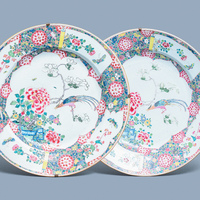 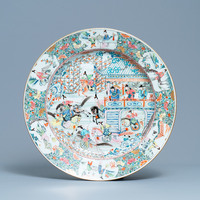 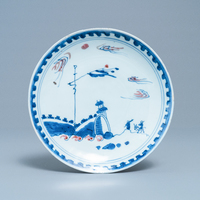 Condition: (UV-checked)
- Exceptionally well painted with attractive and bright enamels, the whole in a very fresh condition.
- With a rim section broken out and restuck between 5 and 6 o'clock.
- A negligible 2 mm fleabite on the rim at ca. 3.30 o'clock.

The scene shows Mu Guiying and seven others of the Yang widows preparing for battle, overseen by family matriarch She Taijun. The story comes from tales of the Yang dan in the early Northern Song Dynasty. General Yang Ye was a great warrior who defended the Middle Kingdom against attacks from the Khitan forces of the Liao Dynasty. In a collection of stories known as Yang Jia Jiang (General of the Yang clan) Yang Ye famously defended the Yanmen Pass in the Great Wall, becoming a favorite of the Emperor. This led to jealousy from the other generals who abandoned him on the battlefield and he was captured and killed. Yang Ye had eight sons, all great warriors and they successfully kept the Khitan forces at bay. This took its toll and eventually the last of the Yang generals was killed as the enemy forces closed in. As such, it was left to the widows of the sons of Yang Ye, spurred on by his wife She Taijun, and led by her grand-daughter, Mu Guiying, widow of Yang Zonghao, to defend the Dynasty. They defeated the Khitan forces and then took charge of the emperor's army defeating a new threat from the Tangut forces of the Western Xia, saving the dynasty.