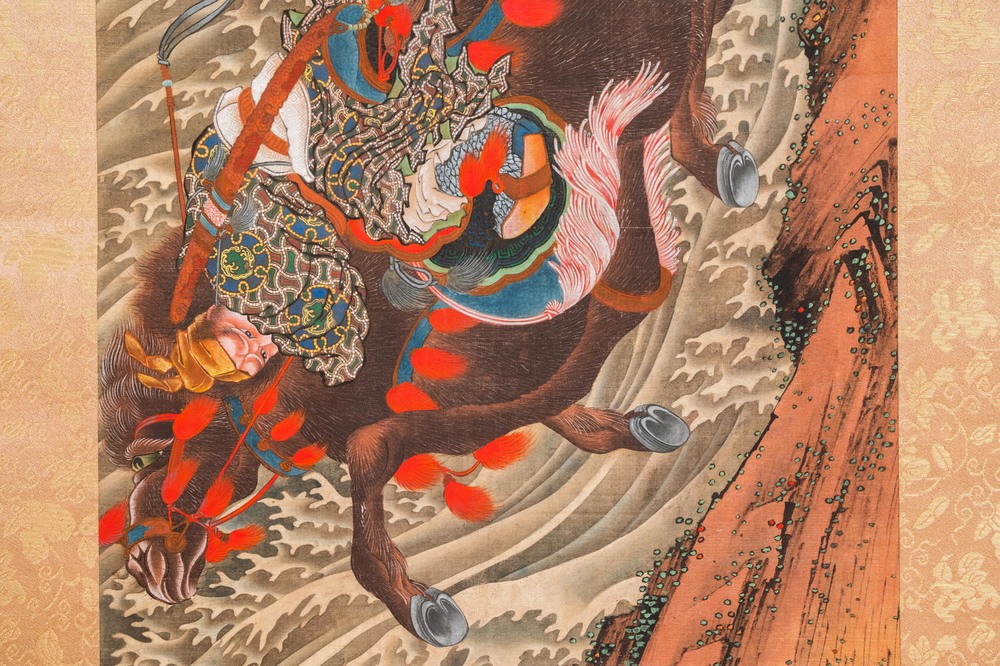 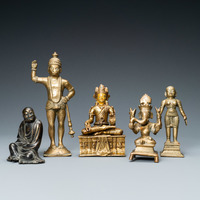 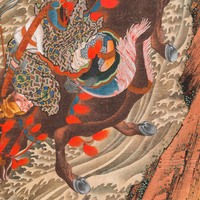 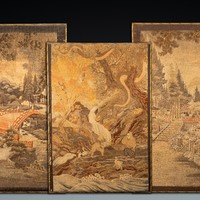 Offered with a complimentary woodblock print from the Hokusai Manga, Vol. 6, published by Toheki-Do between 1817 and 1878, depicting the same scene.

Provenance:
- Unidentified S.T.P. collection (label on tomobako).
- The collection of Dr. Jonathan Hutchinson, England.
- Exhibited in London, Oct. - Nov. 1915: Japanese art & handicraft loan exhibition held in aid of the British Red Cross. Published in the catalogue on p. 18 under No. 43.
- An American private collection.
- Sold at Doyle, New York, April 4, 2006, lot 3108, where it was offered in a lot of four and described as 'Hokusai School 19th/20th Century Four hanging scrolls'.
- A Dutch private collection.
- Published by Prof. Dr. Matthi Forrer in Elegant Gathering in a Scholar's Garden - Studies in East Asian Art in Honor of Jeong-hee Lee-Kalisch, VDG, Weimar, 2015, p. 186-190: 'Both Ryubi and Hokusai making a jump in a newly discovered Hokusai painting'. In this article, the author states: 'The painting I am referring to here is of a Chinese warrior making his horse leap down a rock and jump across a stream while apparently looking back to see wether someone is following him. In this work, identified in the Manga as Ryu Gentoku, we see the famous incident from the Chinese 'History of the Three Kingdoms' (Sankokushi), when Ryubi, or Liu Bei - one of the protagonists of the story - avoids an assassination attempt at a party at Xiangyang where he had been lured. Excusing himself to wash his hands, he manages to escape on his horse. Upon reaching the banks of the Tan River (Tan Kei), his horse falters before eventually making the leap of almost ten metres. (...) one notes that the painting is signed 'zen Hokusai Iitsu', a signature that was first seen on a privately printed poem sheet (kyoka surimono) issued in the autumn of 1820. (...) And yet in spite of the difference in size, the painting is an almost literal copy after the original 'Manga' design. (...) As previously mentioned, the signature 'painted by Iitsu, formerly Hokusai' (zen Hokusai Iitsu hitsu), with seal 'Katsushika' (or 'Tengu', as it was commonly read until recently), was used by Hokusai after 1820 - he appropriately announced his change of name into Iitsu, or 'One year old again', in 1820 when he turned 61, at least by the Japanese count. And after 1831, he occasionally added his age (for instance, as 71 years old) to this signature on paintings, or simply added something like 'Old man', 'rojin'. In the absence of a specified age or the sobriquet 'Old man', one might be tempted to infer that the painting of 'Ryubi jumping his horse across a stream' was painted somewhere in the period between 1820 to 1830. However, early in 1834 Hokusai announced yet another change of name: 'The former Hokusai is changing his name into Gakyorojin Manji' (zen Hokusai Iitsu aratame Gakyorojin Manji). This forms the signature in the first volume of the 'Hundred views of Mount Fuji (Fugaku byakkei) album, which was issued in the third month of 1834. (...) the twenty or so paintings that we know from the Iitsu period fail to demonstrate equivalent painting qualities to those seen in the painting of 'Ryubi jumping his horse across a stream'. (...) It must have taken many hours of painstaking work to paint the horse alone, for its hair is meticulously rendered in numerous hues of brown, reddish-brown, black and grey. This is certainly how Hokusai painted in the 1840's, but this painting dates to before 1834. (...) This painting may well represent a very early example of Hokusai's awareness of painting technique and how he would further explore and improve this manner in years to come.